How bad is the food waste problem?

It is becoming common knowledge that the global situation regarding food waste is bad…..really bad. So bad in fact that the latest estimates from the Food and Agriculture Organisation of the United Nations say roughly one-third of the food produced in the world for human consumption every year (approximately 1.3 billion tonnes) gets lost or wasted. One third!

And this has big implications for the environment in terms of greenhouse gases produced by the waste which is left to rot in landfill and elsewhere. You hear all the time about how bad emissions from transportation are for the environment but food waste gives it a run for it’s money at about 84% of transports global total. That is around 8% of total global greenhouse gas emissions according to the latest stats from the Emission Database for Global Atmospheric Research.

It’s not just direct emissions we need to think about

When you think about it, it isn’t just the emissions directly being emitted from the rotting food we have to worry about it. But to get a food product to the point where we even have the opportunity to waste it requires a large amount of energy too. A tomato that rots in the field produces some greenhouse gases, but nowhere near the amount as a jar of tomato pasta sauce which has been harvested, transported, processed and transported again. That is a big carbon footprint along the supply chain for it to be thrown away for nothing. This problem is exacerbated in areas such as Europe where the manufacturing process requires artificially heated greenhouses.

The ‘developed world’ are by far the worst culprits. Per capita waste by consumers is between 95-115 kg a year in Europe and North America, compared to just 6-11kg a year in sub-Saharan Africa, south and south-eastern Asia.

Disruptive tech to the rescue?

We’ve had decades of being told to recycle more and to use less food packaging but the figures keep going up. It is clear that as with many environmental issues old habits are just not going to change quickly enough. Time for the disruptive solutions to help us out then! Here is a summary of a few recent inventions and technologies that can hopefully disrupt this sector and cut down on the dangerous bi-products of food waste. 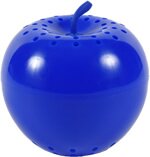 We’ve all been there, you buy lots of fruit and veg to cut down on meat consumption and fill the fridge, you’re feeling good doing your little bit to save the planet. You have all these delicious meals planned and few days pass, you take the carrots out and…….oh crap! They’ve spoiled. Yes, the fact is, if your fruit and veg is thrown away then all those good intentions are for nothing as the food rots in landfill and adds more greenhouse gases into the atmosphere.

Well, Bluapple, a company from Woods Cross, Utah have come up with an ingenious solution. They realised, the reason fruit and vegetables would ripen and eventually rot much quicker when stored together in a fridge was because they give of Ethylene gas as a signaling mechanism to trigger uniform ripening.

In came the Bluapple a very nicely designed device that absorbs this ethylene gas for up to 3 months. And you may have guessed, it looks like a blue apple, cute. Simple but very effective.

Another company attempting to tackle the problem of fruit and veg spoilage is Apeel Sciences with their product Edipeel. Edipeel is essential an invisible, edible ‘peel’ made from plant extracts that is washed onto the surface of foods such as avocados or tomatoes.

This peel reduces water loss and prevents oxidation which slows down the ripening and rotting of the food.

With this product being completely natural, this has to be a no-brainer and will surely become common over the next few years. It’s a win/ win for the grower and for the consumer as food can be picked earlier, has a longer shelf life and doesn’t spoil as quickly at home.

Wakati attacks the environmental problems caused by food waste from two angles. It doesn’t just prevent the harmful emission given off by rotting food but also cuts down on the need for high energy consuming refrigeration units.

Wakati achieves this through the world’s first standalone solution for the preservation of fruit and vegetables without the need for cooling. The clever product is a small tent that can be erected easily anywhere. Powered by solar panels and a small amount of water, the tent unit increases humidity to keep cell structures intact, it also sterilises ozone to reduce mold growth and stores the ripening hormone of fruit and vegetables.

The great thing about their solution is that it can be implemented quickly anywhere in the world and is of particular use in developing countries where temperatures are often high and refrigeration often isn’t available.

Wakati turned the project into an open source project in June 2017 in an attempt to involve scientific and entrepreneurial communities around the world. A great idea, let’s hope to see it implemented as much as possible in the next few years!

And of course, when we talk about waste from food it isn’t just the food itself but the packaging. More and more food is being sold in non-recyclable packaging, with plastic, of course, being the number one culprit.

If we are not careful these bad habits will be picked up in the developing world too and the problem of food waste will increase even further still. It is therefore up to disruptive environmental solutions to step up as fast as possible to solve these big problems. 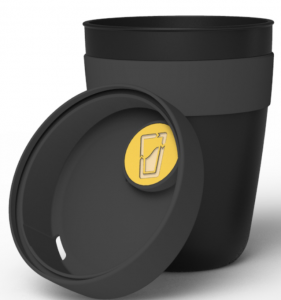 Yes, the world’s appetite for coffee on the go is still increasing, the long-standing joke of a Starbucks on every corner is fast becoming a reality. Don’t get me wrong I love my coffee, but the waste produced from the cups is quite worrying. The worst thing is that many cups appear at first to many people to be environmentally friendly and recyclable, but a closer look will tell you the cup itself is not recycled, it is the little cardboard sleeve!

But there are some disruptive companies appearing on the scene with a mission to tackle this growing problem. One of which is Cup Club.

And how are they doing this? With smart cups! Think of this as the coffee cup equivalent of the popular mobike bike sharing system. Cup Club is being piloted in London and is set to roll out into other areas in 2018. The idea is that you get your coffee as normal from your favourite coffee shop, this will be supplied to you in a ‘smart cup’, which can be then dropped off at high tech was hubs that then deliver the cups back to the shops to be used once more.

As well as the physical solutions mentioned above, disruptive technologies can, of course, come in the form of computer programs and apps. And there are some clever ideas that aim to reduce food waste in this way whether it is aiming at the general public or at restaurants and supermarkets.

Olio is another new disruptor in the app world, aiming to cut down on waste from food and packaging. Riding the wave of the access economy’s recent success story’s such as Airbnb, which has people beginning to embrace the idea of sharing things for the greater good (and to save money too).

Olio goes beyond sharing just your bedroom to sharing the food from your fridge too. They do this via a free app connecting neighbours to neighbours and also the public with local businesses.

The idea is that you can post food that you don’t want on the app and others can snap it up at a cheap price. Local business’ too can post items on here at bargain prices as any cash has got to be better than food in the skip!

As with other access economy disruptors, an idea that once may have seemed ‘weird’ is now taking off as we start to think more creatively about working together to solve issues around waste.

Any keen business person or entrepreneur knows that stats and figures are key if you want a new business to succeed. Companies often obsess about stats of all types, but one area where tens of thousands if not millions of restaurant businesses have no idea of accurate stats is food waste. They will often know they throw away lots of food, but just what impact is this having not just on the planet but on the finances too?

Up steps Winnow, a new system out of London aimed at reducing food waste in restaurants. They aim to do this by attempting to get restaurants to better understand just how much food they waste, in order to know how they can improve and set some measurable targets.

As with many of these disruptive solutions; Winnow is a huge potential win-win. It creates a more ethical business but also a more financially sustainable business that is more likely to succeed.

The app has cool features like a ‘smart scale’ which digitally tracks the amount of food that is thrown away. The employees are updated live so they are much more switched on to how much food is being wasted and these stats are uploaded to the cloud for analysis over the short and long term. And even if a restaurant isn’t that concerned about their environmental footprint they must get excited at the prospect of saving between 3% and 8% in cash, which is what Winnow is boasting.

Food waste is going to only become a bigger problem as the world population continues to grow and the use of packaging increases in the developing world. It is therefore going to be vital for these companies mentioned and much more besides to help tackle this problem in an innovative an most importantly disruptive way.

This is going to take a balance of smaller more affordable tech for the everyday consumer and higher cost tech for the producers and distributors of the food to keep the overall footprint to a minimum.

My theory (as you will come to realise as this blog grows) is that although I would love everyone to be green and change their behaviours for the better. The best way to tackle these environmental issues quickly is through clever, tech-based solutions.

If you’ve seen any other food waste tech solutions that are worth a mention then leave a comment below.

Rob is the head writer and podcast producer for The Disruptive Environmentalist. He is on a mission to build a community of people that are passionate about solving environmental problems.

Thanks to the work of campaigners and activists we have reached a point where the majority of people are aware we are facing an environmental crisis (finally!). From climate change to species...

Check them out by clicking here